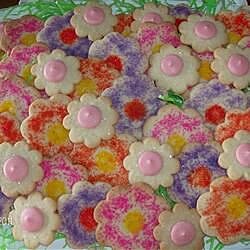 Day 5 brings you a dense shortbread cookie. A lot of the times this cookie is made during Christmas time when you want a more indulgent cookie. Come and check it out at All Recipes.

Facebook has a recipe for Raspberry and Almond Shortbread Thumbprints.

“Shortbread is a type of cookie with a high butter content: The traditional recipe is one part sugar, two parts butter and three parts flour; some recipes use a 1:1:1 ratio, and there are variations in between (later recipes added eggs). It has been called the ancestor of all butter cookies. The original shortbreads were made with oatmeal; the more elegant white flour came later and lightened the cookie. The addition of rice flour gives shortbread a grainy, crumbly texture, while cornstarch (corn flour) gives it a more dense texture. Shortbread originated in Scotland (where cookies are called biscuits) in medieval times. According to EnglishTeaStore.com, Scottish shortbread evolved from medieval biscuit bread, a twice-baked, enriched bread roll dusted with sugar and spices and hardened into a rusk. Eventually, butter was substituted for yeast, and shortbread was born.”

Read more about the History of the Shortbread Cookie here.

It is almost the weekend!!!

If you have any questions, please call or email us at…
(360) 572-4953 | info@thecookiecuttershop.com
Store Hours: Mon-Fri: 7AM-3PM Pacific
Thank you for visiting The Cookie Cutter Shop!